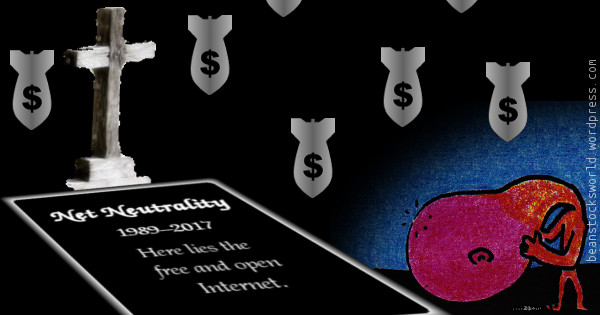 On Thursday the 14th of December 2017, our beloved friend and platform for the free exchange of ideas passed away after a long struggle with greedy broadband corporations and their corporate stooges such as Ajit Pai who was sent by Verizon to assassinate Internet Freedom (more commonly known as Internet Neutrality). All its life, the Internet served us as an open platform where facts and ideas could be freely exchanged and suppressed peoples could organize their opposition to despotic regimes and lethal corporations.

It has been our platform for grassroots organizing and for getting around the propaganda, lies, and media blackout of the corporate establishment media. With corporations like Comcast and Verizon now being put in charge of what you can access on the Internet, this glimpse of hope and liberty is now doomed. Among those who keep up the fight for freedom, strengthened by the belief that faith can move mountains, there are those who hope they can replace the abysmal broadband corporations with local, municipal broadband services. Perhaps they will perform a modern day resurrection miracle in raising our beloved friend from the dead this way. Or perhaps they will create an army of local replacements that will restore freedom from ISP censorship in at least those lucky towns where they succeed. Be warned, however, that the corrupted FCC will ban states from enacting their own Net Neutrality, that corrupt politicians in some states will prohibit towns form creating their own Net Neutrality, and that Ajit Pai is already placing shackles on the FTC, lest it try to protect towns or small competitors from the corporate broadband giants.

Another remaining hope lies with making Congress stop this corporate take-over of our digital airways. To pursue this or other ideas, browse to battleforthenet.com while you still can.

Thank you for your love of our great friend. Funeral services will be privately held all over our nation. Memorial donations may be made in the Open Internet’s name to Beanstock’s World from which a book will issue when nobody can come here to read online anymore.

Ending Note: It takes me at least 100 hours a month to research and write for this site and my book. If you find any value in what I do, please consider becoming a patron and supporting this site with an automatic monthly donation of $1 or more. If you can’t afford this, then don’t, but please share my posts, tell folks about my online course offering, refer others to this site, refer me to paying outlets, partake in discussion, or contribute essays of your own. Thanks. Only together can we change the world. 🙂

One thought on “Obituary for the Free and Open Internet”