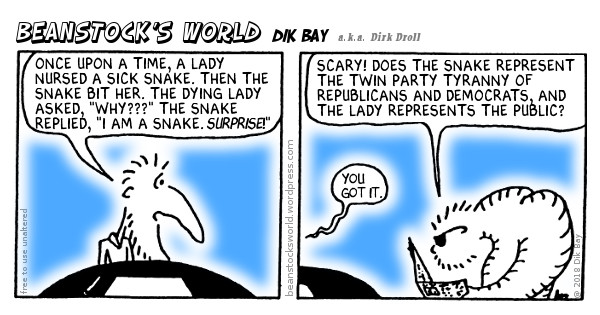 Here is a simple question for everybody. We all know we are in a horrible mess in the States today. No job security. Disappearing jobs. Growing unemployment, underemployment, and insecure underpaid gigs. Disappearing benefits. Disappearing retirement. Failing health coverage. Home foreclosures and astronomic rents. Crushing student loans and credit card debts. Growing homelessness. Working people sleeping in their cars. Crumbling infrastructure. Disintegrating society. Rising fascism, government surveillance, and criminalization of dissent. Total disregard of our Constitution. The majority of the people being driven closer to or deeper into poverty…

Looking back a generation or two, America was in a Golden Age for about 30 years. Many workers earned enough for a single earner to maintain a family. They had job security. They could build or buy homes, pay their mortgages off during their working lives, and enjoy a financially secure retirement. Healthcare worked for a lot more people then than now. College was affordable or free. We sent men to the moon…

This Golden Age was the result of FDR’s famous New Deal and its diminished continuation, rebranded as The Great Society. Even after FDR, things kept going well for a while since even Republican presidents like Eisenhower didn’t dare to outright cancel the New Deal. Americans were proud of their country, and while they honored individualism, they had a together-we-are-strong society of caring about each other and ensuring a good life for all.

So, the question is: How did we get to our failing wolf-eat-dog society? Which government, which political party undid the New Deal, The Great Society, the War on Poverty, the Golden Age?

Well, when you take a look, Republicans and Democrats passed the ball to each other regularly all these decades of decline, spending about equal time in power.

I see only one logical conclusion: They both sold us down the river.

The name for them is party duopoly (or twin-party tyranny). It’s been poison to us, just like the snake killing its rescuer in the famous fable. Every time one party sits in power, the other clamors for us to take the seats of governing power back for them, and as we obediently comply both parties continue to sell us out. Attempts by awakened Americans to take these major parties over from within have consistently failed. The latest attempts of taking over the “Democratic” Party since its in-your-face rigging of the 2016 primaries had some minor success here and there, but on the whole the corrupt party “leadership” has stayed in power, installed a chairman who shielded the banksters and Wall Street predators of the Great Recession from prosecution, and even purged its committees from those who want change for the better.

Nomiki Konst, a party insider ostensibly fighting for party reform, thinks there has been substantial success lately that might indicate a weakening of the party bosses and allow “Democratic” Party reform from the inside to go forward at last (see the coming Video Weekend). It surely would be great, but I think there have been so many signs of insurmountable establishment opposition that I believe strong pressure form the outside is indispensable for overcoming the poisonous duopoly. This includes hard work to form a new party or a functioning, cooperative coalition of existing third parties supported by public demand and a locally organized people’s movement.

Some people think these efforts of a take-over from within and pressure from without take away steam from each other. I don’t agree. I believe that (A) they support each other by bringing pressure to bear on corrupt politicians from multiple sides, not just one side against which they can shore up much more easily (think of military pincer movements); and (B) both efforts are happening anyway, so opposing one of them when you put more trust into the other is a waste of effort. Unity means we stay aware of our shared goals and support each other in a multiple strategy approach, always on the lookout for collaboration and the chance to coalesce into one insurmountable political force that the billions of dollars of the plutocracy cannot overcome, based on the simple truth that they may have siphoned away most of our dollars into their vaults, but they are few and we are many. They may have the dollars (for now), but we are the people.

Extended reading: Here is a short but informative (though not perfect) historic review on the New Deal, Great Society and such. It’s titled How the Great Society Reforms of the 1960s Were Different From the New Deal. Important item of note: It was Kennedy (yes, JFK!) who sparked off the first roll-back of FDR’s taxing of the rich.

Below is the original version of the accompanying cartoon. Wondering if it was really effective, and therefore discussing it with others, I changed it to the featured version above. It’s really best when we all work together, I think. 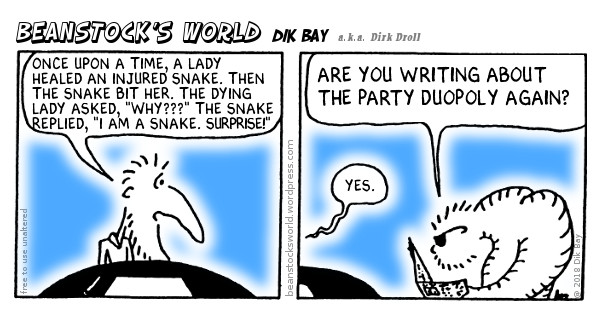 Ending Note: It takes me at least 100 hours a month to research and write for this site and work on my book. If you find any value in what I do, please consider becoming a patron and supporting this site with an automatic monthly donation of $1 or more. If you can’t afford this, then don’t, but please share my posts, tell folks about my online course offering, refer others to this site, refer me to paying outlets or companionable fellow blogs, partake in discussion, or contribute essays of your own. Or help my book get out there when it’s finished. Thanks. Only together can we change this world. 🙂

2 thoughts on “The Poisonous Duopoly”