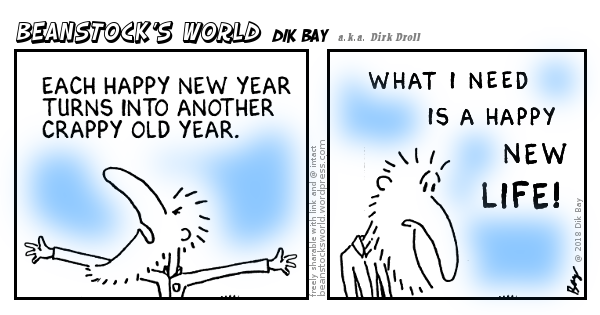 For many of us, each Happy New Year turns into yet another Crappy Old Year. Who or what is to blame? We are trained to blame ourselves, but are you, or am I, really guilty of causing economic crashes or sudden health crises, mass lay-offs, and the like? Are we the creators of a profit-driven health insurance system that refuses to cover millions and covers many others only incompletely, so that the majority of American bankruptcies result from health crises? Are we really to be blamed for not being rich when our society is formed like a wealth pyramid with an impoverished broad base and a tall wealthy spire that rises many miles above the rest of the pyramid, all the way into outer space?

Did you or I create such a mind-bogglingly uneven wealth distribution that makes sure that only a small handful owns as much as the rest of us, no matter how hard we work? Perhaps, if you are Jeff Bezos, you did indeed contribute to this wacky distribution of wealth, raking in over a hundred billion dollars in wealth for yourself while holding down thousands of your employees with meager wages and disgusting working conditions. If you are one of the super-rich banksters or Wall Street predators, you surely did push a lot of people into poverty and debt slavery, but did you create the capitalist system into which we were all born, a system which demands that such things be done?

On one hand, if you are cast in the role of a capitalist, you worry that if you choose to be a nice capitalist treating his workers well, you will soon be driven out of business by another capitalist who exploits his workers brutally thus maximizing his profits with which he can out-invest you. On the other hand, you have almost certainly been raised to consider this system of cruel inequality as natural and merit-based. You have almost certainly adopted the concept that you are entitled to great wealth and your workers or customers are not. And the many who struggle to survive in or near poverty have likewise learned to blame themselves… And, yet. Has any of us, whether we are located at the bottom or the top or somewhere in between, created this system and the cultural mentality that tells us that this inhumane distribution and treatment of each other is all natural and everybody deserves his good or bad fortune? Have we? Not really, right?

It has taken generations to create this system, but each generation (our own included) plays its part in upholding it and passing it on to the next generation.

A video I shared in my latest Video Weekend was very telling indeed. It presented a former capitalist who recovered his humanity after he went out of business and had to work for others. He described how, when he was still an employer himself, he felt completely entitled to pay his employees ten bucks an hour while swiping fifty bucks into his own pocket. When talking to fellow capitalists back then, they shared information and thoughts they never share with him now that he is in the working class and therefore perceived as a lesser human being. Those at the top form a private club in which they pat each other on the back and uphold the myth of being superior beings rather than people who lucked out in the lottery of life which places us on different spots in the preformed inhumane wealth pyramid that we did not create but nevertheless uphold.

When he dropped out of this private club, he recovered his humanity, and now argues against capitalism because he has come to realize that it prevents people from being human.

That is indeed the key issue we must all come to understand, whether we are rich or poor. A greed-driven system of wealth and power distribution deprives us of our human characteristics. Our reptilian ancestors fought their peers over food and territory. That was all they knew to do. When we humans entered the stage, we developed not only creative intelligence with which to build weapons and machines, but also social instincts that let us collaborate, making us invincible through strength by numbers, able to move mountains, and dominate the rest of life on the planet.

These social instincts also enrich us with compassion, caring, kindness, generosity, respect, friendship, and love that starkly distinguishing us from our asocial ancestors. They create human bonds which form the essence of what makes our lives worth living. These social instincts that make us human pushed the older asocial instincts to the back. Otherwise we would never have risen to dominate all other species. We would have been isolated, weak critters with tiny teeth and no claws, easily overcome by large predators and harsh diseases or famines and droughts. Without building a profoundly changed, human-friendly environment over many generations, our species would have never survived, leave alone dominated all others.

However, when we are born and raised in a hostile environment of competition and greed, a system that puts profits over people and pits us against each other, then our asocial reptilian instincts come back to the fore, having a “lucky” few dominate and gouge the rest of us and the oppressed rest of us kowtow and buckle submissively so as not to be killed. Is it any wonder that under these circumstances our civilization is falling apart and we are headed towards self-extinction?

I think not. The lesson should be clear. We need to recover our humanity and fundamentally change our system, cure it from its obsession with profits and domination, and replace these sick inhuman objectives with human ones, easily expressed with a simple phrase: a good life for all. With this resolve, with this governing principle, we can save ourselves. So, let’s not waste our time with blasé Happy New Year wishes or turgid spectator politics. Let us wish each other Happy New Lives. Human lives. Made possible with a profound system change that reshapes our wealth pyramid into a large house for all. Let’s absorb the astronomic spire and turn it into stilts that lift the floor above poverty, and let’s cap the roof never again to rise miles high, so that a tiny ruling class with a reptilian mindset can never return to warp our society and our mindsets for us all, including themselves.

Our flawed current system actually has the means to do so. Taxes and Social Security. All we need to do is tax away excessively rich incomes and wealth, and use them to expand Social Security (including Medicare) to put a financial and medical safety floor under everybody’s feet. It would reshape our society into a human one where all human beings can and will thrive. A man-made paradise. Heaven on Earth where we can all rise to our best potential, replacing our current Hell on Earth that keeps us all from a human life worth living and brings out the worst in us thereby reinforcing the horrid trap into which we were born.

Here is that video again. If you missed it, I highly recommend you watch it.

(Note: If the video linked above gets deleted, you may search the Internet for the title: “Confessions of a Capitalist: how a serial entrepreneur became a dirty commie”)

And here is another, shared earlier this year, in which a group of lesser relatives in the animal kingdom shame us and demonstrate that social instincts can outrun the asocial ones, to everyone’s benefit:

(Note: if the video linked above gets deleted, you may search the Internet for the title: “Why hierarchy creates a destructive force within the human psyche (by dr. Robert Sapolsky)”)

In a sense this article is a 2018 recap of Beanstock’s World. This year, we refined the idea that our mindset is the most important thing to change if we are ever to make our world suitable for a good life for all.

Let’s keep reading, watching, and discussing here, and work towards a world worth living in! Be sure to sign up for update notifications if you haven’t yet done so.

Ending Note: Don’t forget to subscribe to free updates and to share widely critical stuff you encounter here and elsewhere. Also, please lend support if you can. Together we are the change we have been hoping for!