For sane people, the Charlottesville Murder was either a psy-ops trick or a lunatic’s egress of identity politics with which we, the 99%, are constantly divided from above to stop us from rising up to fix our country so it becomes a good place for everyone. The brutish and idiotic murder cannot be justly explained any other way. Wage slaves hating on each other over superficial stuff like skin color is simply not justifiable as a sane act. Rather, it is the mark of being manipulated from above. And when Steve Grumbine rants about people being too lazy to try and understand economics, he is simply pointing at the elephant in the room so many of us fail to see: the origin of Money in Politics. We all realize that Money in Politics is what turns our own government against us, instead of it serving us, as it is supposed to. Many of us realize that Money in Politics turns our economy against us. But the thing, that too many people still are “too lazy” (or to afraid) to do, is to follow the money and realize that it is our flawed economic system itself that creates the concentration of Big Money (in a few privileged hands) which then gives rise to Money in Politics in the first place. It’s a vicious circle, one part of which too many of us still don’t see.

I wrote about this yesterday. But if you prefer to hear this packaged in a passionate rant on video, here it is:

(Note: if the video linked above gets deleted, you may search the Internet for the title: “Neoliberalism’s bastard spawn. Wanna know why racism has a foothold in America?”)

Support alternative media and citizen journalism. Help us any way you can.

So, recently, we had a murder of peaceful protesters by a right-wing, white supremacist youth, or some such, and many of us are joining the barking at each other across sections of the population so neatly divided into splinter groups across the dividing lines of identity politics and top-down propaganda.

The thing we often forget in our current right-left polarization is that the fury (or even hate) which can lead to outright violence is caused by a terrible injustice which should actually unite rather than divide us, the American People, because it hits all of us who aren’t rich. Whether we join right-wing or left-wing extremism, or no extremism at all, we – the majority – are all caught in one and the same wage slavery, ripped off, exploited, and oppressed from above, and used like domesticated animals for political spectacles – whether they be street marches or election circuses – even as we don’t actually get a real voice in how our country’s society should be organized.

END_OF_DOCUMENT_TOKEN_TO_BE_REPLACED 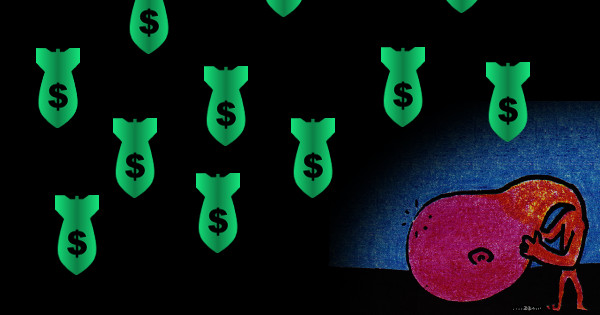 Last night another sick-minded, pathetic, inexcusable Islamist terror strike occurred (at least, we believe it’s Islamist like most absolutely horrendous terror attacks these days, what a religion…). Once again, the target was situated in Europe: Manchester, England. But what is really behind this?  END_OF_DOCUMENT_TOKEN_TO_BE_REPLACED

It’s a reality of life: people have differences. However, I find that the differences which divide us politically are essentially artificially overblown natural differences (like race, ethnic, or sexual differences) which the establishment hypes up and uses to manipulate us from above. The Republican and “Democratic” Party and their echo chambers in the corporate media are very good at dividing and manipulating us with these. They group us into opposing camps and train us to bark and snarl at each other, rather than join forces and resolve the concerns we all share. END_OF_DOCUMENT_TOKEN_TO_BE_REPLACED

There may have been more good stuff in his speech than this 9 minute segment shows, but I haven’t found the whole speech. Interestingly, this clip was posted on Youtube in 2009!

(Note: if the video linked above gets deleted, you may search the Internet for the title: “Jesse Ventura and his best patriot speech ever!!!.”)

Oh, and there is another, a written memo in this case. I haven’t been able to verify it well, but it is rousing and worth sharing, whether it’s from him or not:  END_OF_DOCUMENT_TOKEN_TO_BE_REPLACED

Of course! He’s a super rich kid. They get their behinds powdered from the cradle to the grave:

(Note: if the video linked above gets deleted, you may search the Internet for the title: “Former Trump Staffer: ‘We Had To Baby Him.'”) END_OF_DOCUMENT_TOKEN_TO_BE_REPLACED

As someone said, it’s like asking an Amish person to head NASA. END_OF_DOCUMENT_TOKEN_TO_BE_REPLACED

A little over a week ago, Trump issued the “Protecting the Nation from Foreign Terrorist Entry into the United States” Executive Order, banning nationals from Syria, Iran, Iraq, Sudan, Somalia, Yemen, and Libya from entering the United States. Some people think this action necessary to ensure the safety and protection of American citizens, others feel it is discriminatory, unconstitutional, or even counter-productive. Some supporters have been thumping the Constitution and others raising the specter of Islamist terrorism. In part, I can agree (I definitely want us to do more for our safety), but I feel that some people are making this issue too simple for themselves: END_OF_DOCUMENT_TOKEN_TO_BE_REPLACED

(Note: if the video linked above gets deleted, you may search the Internet for the title: “Immigrant America: The High Cost of Deporting Parents”)

This is what the casualties of political expediency look like. Using demagogy, politicians get themselves elected into their cushy jobs where they get rich quick from bribes. Moronic ICE agents act like they have no brains at all, wreaking havoc in our society just to meet their insane quota. Families are torn apart, valuable community members torn away, lives long in the building destroyed. We taxpayers get to pay BILLIONS every year for our jacked-up deportation rate (for example $5 billion in 2010) in direct deportation costs alone (some $12,500 per deported person) and easily 5 times more in mopping up the aftermath through welfare, housing assistance, and Medicaid paid to formerly self-sufficient working families whose bread-winners have been deported. An estimated 150,000 children with citizenship lose a parent to deportation each year. How damaged will they grow up? Damage is done not only to the deported but also to their families and communities. END_OF_DOCUMENT_TOKEN_TO_BE_REPLACED

America has 1.2 million miles of lead pipes for water delivery, pipes that have a lifespan of about 75 years, and many are reaching that age. It’s a recipe for disaster that experts warn will cost close to $1 trillion to fix. Thus, Flint MI, is just a tiny piece in a much larger story.

Read the full story on truth-out.org: The US Is Suffering From a Very Real Water Crisis That Few Are Acknowledging